Pluto in 12th House: A Time of Transformation and Revolution

With Pluto in 12th House, it can bring about a time of intense transformation, both on a personal and spiritual level.

If your natal chart places Pluto in the 12th House, know that you are going through a major life change. It will require you to let go of old ways of thinking and being.

This can be a difficult process, but it is ultimately one that will lead to growth and enlightenment.

Read on to learn more about how this planet works in your natal chart, as a transit, and in your relationships. We will dive into the meaning of this house, the meaning of Pluto, and how natal people are affected by this position.

We will also explore how Pluto in twelfth house synastry relationships work. Finally, we will explore this Pluto transit in more depth and learn how it affects every zodiac sign when this house and planet are conjunct.

The 12th House in Astrology

This house is associated with the unconscious, hidden aspects of ourselves. It is a place of mystery and secrets, and it can be difficult to access this energy. While it feels like the end of the road, it is actually a place of rebirth and transformation.

This house asks you to let go of what you know and to surrender to the unknown. It can be a time of isolation and loneliness, as you may feel disconnected from the world around you.

This is a time for introspection and reflection, as you search for your true authentic self.

Once you take the time to go inward, you will find that the 12th House is a place of great power and potential. It is a place of magic and miracles, where anything is possible. Integrating this house allows us to have a larger social impact.

We will learn to see the world from a more compassionate and understanding perspective.

The Meaning of Pluto in the Zodiac

Pluto is the planet of transformation, and it can often bring about major changes in our lives. It is associated with the underworld, and with things that are hidden from view.

It is represented by the sign of Pisces and ruled by Neptune, the planet of dreams and illusions.

Jupiter is also considered a co-ruler of Pluto, as it represents growth and expansion. When Jupiter is in a positive aspect with Pluto, it can bring about great opportunities for growth and change.

When Pluto is in the 12th House, it can bring about a time of intense transformation, both on a personal and spiritual level. This can be a difficult process, but it is ultimately one that will lead to growth and enlightenment.

Strengths of Pluto in the 12th House

People who have a natal placement of Pluto in the 12th House often have a strong sense of intuition. They are able to see beyond the surface, and they can understand what is happening on a deeper level.

They may also be good at working with people who are going through difficult times. They have a compassionate nature, and they are able to offer guidance and support when it is needed.

Pluto in 12th house individuals tend to do well with changes in life. This can include changes in their career, relationships, or lifestyle. They are able to adapt to change easily, and they often see it as a time of growth and opportunity.

They often have a vision beyond what is happening in the present, and they are able to see the potential for growth and transformation. They are destined to help support global change, political change, and spiritual evolution.

Weaknesses of Pluto in the 12th House

People who have Pluto in the 12th House may find it difficult to express their emotions. They may bury their feelings and keep them hidden from view. This can lead to a lot of emotional tension, which can be difficult to deal with.

It’s possible for this person to get too caught up in their head, and to lose touch with what is happening in the present. They are also known as countercultural people.

This means that they won’t agree with the status quo, and they will often go against the grain.

This can create tension and conflict in their lives, as they may not feel like they fit into mainstream society. It can be difficult for them to find a place where they feel accepted and understood.

The 12th House is also known as the house of karma. This means that people with Pluto in this house often have to deal with the consequences of their past actions.

They may have to face up to things that they have done in the past, and they may need to find a way to make amends.

How Pluto in the 12th House Affects Relationships and Marriage

People with Pluto in the 12th House often have a deep and intense relationship with their partner. They are able to share their innermost thoughts and feelings, and they can form a strong bond of trust.

They are often attracted to partners who are also sensitive and intuitive. They need someone who understands them on a deep level, and who can offer them support and guidance.

This person has a strong sense of empathy and will get to know the good, bad, and ugly of their partners. If they have Pluto in the 12th house, it’s possible for them to be in a relationship with someone who is not good for them.

They may be attracted to abusive or destructive partners, and they may find it hard to break free from the cycle of abuse.

This is because this person, with the dreamy influence of Neptune, is always idealistically trying to help others. They may fall more in love with the idea of the relationship than with the actual person.

They may be blind to the negative aspects of their partner, and they may be too forgiving when it’s not warranted.

How Pluto in the 12th House Influences Careers

People with Pluto in the 12th House often have a career that is related to helping others. They may be in the field of counseling, social work, or psychology.

They are often drawn to careers that offer them a chance to make a difference in the world. They want to help others heal and grow, and they feel called to this type of work.

Their career may also be related to the occult or spirituality. They may be a teacher or a guide, and they may have the ability to help others connect with their innermost selves.

People with Pluto in the 12th House often find it difficult to stay in one job for too long. They are always looking for something more, something that will offer them a chance to make a real difference.

They may be drawn to careers that are constantly changing, and they may never feel like they quite fit into the traditional workforce.

This person is happiest when they are using their intuition and their deep understanding of people to help others. They need a career that allows them to express their creativity and their unique gifts.

Synastry is the astrological study of two people’s charts to see how they interact based on their zodiac placements. This means that when two charts are overlayed, one person’s Pluto position intersects with the other person’s 12th house.

It can help to understand the nature of the relationship and how it is likely to evolve.

When it comes to relationships, Pluto in the 12th House can be a difficult placement.

These people often have a lot of karma to deal with, and they may have a difficult time trusting others. They have a common understanding of how the world works but need to be careful not to be too cynical of each other.

This is because they are both aware of the darker parts of life and may have a hard time letting these go.

Whether it is from a past relationship or past life, both of these people are wary of being burned by a long-term romantic relationship.

They often have a deep and intense relationship with each other. They are able to share their innermost thoughts and feelings, and they can form a strong bond of trust.

The Pluto person can help the 12th House person to heal their past wounds and to grow into their highest zodiac potential.

The 12th house person can help the Pluto person to connect with their intuition and their deep spiritual understanding. They can help them to find their authentic path in life, and they can offer support during difficult times.

Even if Pluto isn’t in the 12th house in your natal chart, it can still influence your relationships when it transits through your chart. This is because transits are a time when the planets move through different areas of your chart.

When Pluto transits your 12th house, it can bring up all sorts of intense emotions and issues that you weren’t previously aware of. Any former resentments, drama, or unfinished business will come to the surface.

This is a time when you need to be especially aware of your relationships with others. Are you in a healthy, supportive relationship, or are you stuck in a cycle of abuse?

Pluto transiting your 12th house can be a wake-up call about the kind of people you’re attracting into your life.

The type of transit will help you to understand the best way to deal with these intense emotions. If Pluto is in retrograde, then you may need to go back and deal with some of the issues from your past.

If Pluto is in direct motion, then you’ll need to face them head-on and take action to change the situation.

Pluto In Other Houses

Other Planets And Asteroids In The 12th House

When these two energies come together in a birth chart, synastry, or transit, Pluto in the twelfth house can indicate a powerful shift in energy.

A new cycle of consciousness is on the horizon. If there is a resistance to letting go of the past or old ways of thinking, then there can be a lot of upheaval and chaos.

But if you’re able to surrender to the process, then you can find great transformation and growth through Pluto. This is a time for healing and for re-inventing yourself.

Allow yourself to be guided by your intuition, and don’t be afraid to explore the dark corners of your psyche. The truth is waiting for you there.

Learning about your zodiac chart expands far beyond the twelfth house. If you want to dive deeper into the meaning of your sign and all the places it intersects with other planets, you can get a free moon reading.

It will give you personalized insight into your unique journey and help to guide you on your path.

Good luck on your zodiac journey! Pluto in 12th House: A Time of Transformation and Revolution Uranus in 8th House: An Abundance of Depth and Change 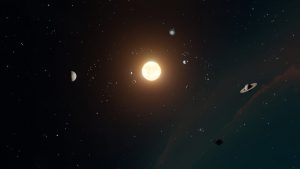 Planets In Astrology: Which Planet Of The Zodiac Influences You?